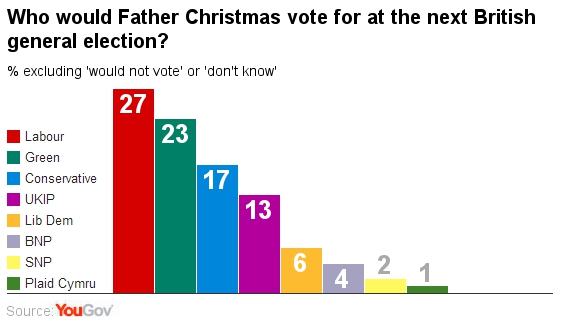 Support tends to fall along party lines, which makes the strong Green Party support all the more interesting. A majority of Labour voters (64%), Conservative voters (59%) and UKIP voters (60%) all believe that Father Christmas would vote for the party that they support. Worryingly for the Liberal Democrats however, just 30% of their voters think Father Christmas would vote Lib Dem.
A German museum has applied for Father Christmas to be added to the UNESCO list of cultural heritage. Felicitas Hoptner, director of the German Christmas Museum is keen to protect the original German "Father Christmas" character from the influence of the more recent American incarnation of "Santa Claus".
Image: Getty
Posted by Rugby Green Party at 15:03 No comments:

5 December 2013
CHANCELLOR of the Exchequer George Osborne’s Autumn Statement was dominated by short-term political considerations and a failure yet again to either address the underlying, structural problems which weaken the health of the British economy or move us to a low-carbon, affordable energy future, says the Green Party. Nothing has been done to prepare for the economic storm on the horizon.
In the Autumn Statement, Osborne insisted that “Britain’s economic plan is working” and that the Coalition Government is overseeing a “responsible recovery.”
In response to the Autumn Statement, Natalie Bennett, Green Party Leader for England and Wales, said:
"Mr Osborne was so keen to claim that this was an Autumn Statement for the long term, yet on this issue, as others, he is clearly a man who protests too much.
"Our current economic position is based on high and growing consumer indebtedness, as households are forced to borrow to cover basic costs, and a government-supported housing bubble. The Chancellor says that the sun is shining. Well that proves he hasn't looked out the window today, or looked into the lives of millions of Britons who are struggling to pay the bills, in far too many cases forced to resort to extortionate payday lenders or foodbanks to get by.”
"Instead of working to restructure our economy, to rein-in our reckless, fraud-ridden financial sector, to boost manufacturers and the real economy, to create stable, decent-paying jobs that workers can build a life on, Mr Osborne's focus is instead clearly short-term - to inflate the economy for the mere 18 months to the next General Election."
Caroline Lucas, Green MP for Brighton Pavilion, said:
“The Autumn statement was yet another missed opportunity to take the action that we need that will genuinely move us to a low-carbon, affordable energy future.
“The Chancellor has done nothing to tackle the root causes of fuel poverty or soaring fuel bills. Instead of watering down energy companies’ obligations, he should have announced a major programme to make all homes super-energy efficient. If funded through recycled carbon taxes, this could bring an estimated nine out of ten homes out of fuel poverty, quadruple carbon savings, and create up to 200,000 jobs across the UK.” [1]
“The Chancellor has delivered a lavish Christmas gift to fracking companies – giving them tax breaks to support an irresponsible and dangerous dash for gas that will undermine the urgent action we need to reduce our carbon emissions.
“It’s ironic that a Chancellor who talks about going green is quite happy for the UK to continue to fund massive subsidies for both nuclear and fossil fuels. Taking real action to tackle climate change would create jobs, transform the economy, and help us meet our duty to secure a safe and habitable climate for future generations."
[1] http://www.energybillrevolution.org/whats-the-campaign/
Posted by Rugby Green Party at 11:02 No comments:

'Nelson Mandela was an inspiring figure, he showed that resistance to injustice is possible and that reconciliation is vital. Our memorial to him must be our resistance to injustice and inequality. Those who fight for justice are often condemned until they win the fight and belatedly are then described as heros, we need to be aware that across the world there are new Mandela's who will be abused until they succeed in making necessary change.

However Nelson Mandela must also be remembered as a peace maker, advocating reconciliation between former enemies, this is a practical side of his work that we can all learn from. South Africa has made great progress but it is still a society where poverty divides communities, we are aware that from the Marikana massacre to battles against electricity privatisation, the long walk to freedom still has many miles to go. Mandela was never just one man, he was a product of a process iniated by South Africans and international networks for liberation and that process must continue'
Posted by Rugby Green Party at 11:00 No comments:

Shop for eco products and donate to Rugby Green Party at the same time!