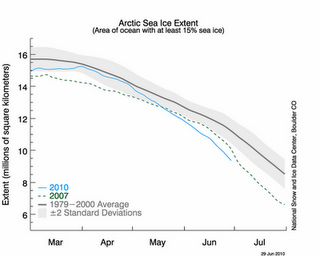 This isn't good. 2007 was a record low amount of ice cover (dotted line) and this year the ice cover is even lower.

We are a party with policies on nearly every area, but we came into existence to do something about the long term future for our society. On a day when the Independent reports that we are not really making any underlying dent on our CO2 emissions, it truly is a worrying future not just for generations unborn, but for all the people that share this planet today.
*Article taken from http://www.petercranie.blogspot.com/
Posted by Rugby Green Party at 21:44 No comments:

THE MUSLIM AND IRISH EXPERIENCE

This excellent video explores the way the right wing media attempts to divide people and communities. (Pic) Salma Yaqoob who the Green Party stood down for the last General Election in Birmingham after a 84% vote of Green Party members in Birmingham.
http://www.youtube.com/watch?v=7GyNf3qhezw&feature=player_embedded
Posted by Rugby Green Party at 21:09 No comments:

Caroline Lucas MP British Members Of Parliament Speak Out Against Trident, Afghanistan and the Bud

Caroline Lucas MP British Members Of Parliament Speak Out Against Trident, Afghanistan and the Bud
http://www.youtube.com/watch?v=bVnc2azY6zU&feature=player_embedded
Posted by Rugby Green Party at 05:28 No comments:

Slashing welfare benefits and governmental spending by 25% could cause up to 38,000 extra deaths according to new research. Also, the TUC shows that the Lib Con budget will result in Britain's poorest 10% suffering a 21.7% cut in their incomes while the richest 10% will suffer a cut of just 3.6%. So much for the 'progressive budget'.

Posted by Rugby Green Party at 04:58 No comments:

A "budget for pointless austerity"

"In spite of the Chancellor's protestations, this budget was neither unavoidable nor fair. Instead it was a massively failed opportunity to shift the economy onto a fairer, greener pathway.

"Devastating public spending cuts of the sort announced today are not ‘unavoidable.' They are not an economic inevitability - they are an ideological choice.

"Nor was this budget fair. A VAT rise, benefits cuts for all, a public sector freeze, and swingeing cuts in most government budgets of 25%, will all of them hit some of the poorest hardest."


Cuts are "unnecessary and destructive"

This week Caroline Lucas published a new report (1, 2) arguing that the cuts are both unnecessary and destructive - and saying that by cracking down on tax evasion and avoidance the government could raise tens of billions of pounds a year.

"It's been demonstrated that any efforts that are needed to address the deficit, once the economy is back to better health, can be paid for through progressive tax reform, so that the poorest are not forced to pay the highest price for the excesses of the bankers."

The Green Party leader and Brighton Pavilion MP continued: "We need a Green New Deal - a major investment package to rapidly modernise the UK economy for a low-carbon future, while seeing off the recession through large-scale job-creation. That's the kind of policy the new government should have put centre-stage."

Caroline Lucas concluded: "Any notion that by voting Blue you get Green was nailed today by the stark absence of any serious measures to promote urgently needed environmental measures."
Posted by Rugby Green Party at 16:07 No comments: