JOIN THE LOBBY OF THE TUC FOR A 24hr PUBLIC SECTOR GENERAL STRIKE!

The Rugby Against the Cuts campaign are supporting the forthcoming lobby of the TUC on the 11th September by the National Shop Stewards Network to call for a 24hr Public Sector General Strike to defend jobs and our services.

Details for the coach from Coventry going to the NSSN organised lobby of the TUC have now been confirmed. Bob Crow (RMT) and Mark Serwotka (PCS) will be among the speakers at the rally before our march to the TUC to demand action.

This will be a very important gathering for the trade union movement, make sure you are there so the TUC is left in no uncertain terms that the rank and file of the unions are demanding they co-ordinate action. A good rally will also give support to the likes of Crow and Serwotka who will no doubt continue to argue for co-ordinated action within the TUC.

Further leaflets and a petition to be used in your workplace or community can be found here http://www.shopstewards.net/ 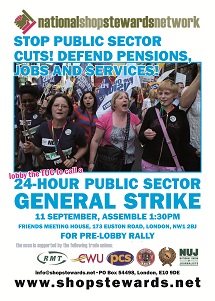 Posted by Rugby Green Party at 05:14 No comments:

If any of our politicians (Tory & Lib Dem and also Labour for that matter) had given just 1 minute thought to the warnings emanating from the police, youth and community workers about the tinderbox of youth disengagement that their policies were adding too, then they may have thought out a different strategy to that of making the baulk of ordinary people in this country (not least the over 1 million young people on the dole) forced to pay for the gambling debts of the very richest in society.

Taking away a young persons ability to have a stake in society by stopping the ability to go to college or get a decent job at the same time as slashing the Police, Youth Service, educational provision and also the drug services is only going to end up with the scenes we have seen over the last few days.

Is it any wonder that in a Consumerist society that have allowed the rich and powerful to fiddle their expenses, taxes and at the same time push up prices of food and utilities without a whimper from those who like to profess ‘we are all in it together!’ (A falsehood if their have ever been one) that we end up with self interested looting by some?

Something has got to change in our society, so that instead of wide boy practices of ripping off each other and caring little of the consequences, we get a society which is run in a sustainable manner for all its citizens.

The cuts need to be reversed now! (especially to the Police and Youth Services), the Bankers and super rich must pay their dues and also we need to have a proper honest debate (and action) about how we can ensure that our communities do not have to go through this turmoil again.

This link shows the contempt by the CONDEM Government for the warnings last year of the Police about make cuts - http://www.guardian.co.uk/uk/2010/sep/15/theresa-may-cut-police-budget-without-violent-unrest

Posted by Rugby Green Party at 03:33 No comments:

RAGE AGAINST CLEGG AND THE LIB DEMS 18TH SEPTEMBER IN BIRMINGHAM

The Liberal Democrats are holding their annual conference at the ICC in Birmingham this year, and there will be a demonstration on Sunday 18th.

The demo has been called by Midlands TUC and Right to Work, and is being supported by all the anti-cuts groups in the West Midlands, including anti-cuts groups in Birmingham, Dudley, Wolverhampton, Walsall, Shropshire, North Staffs, Coventry, Nuneaton, Rugby and Worcester.

TUC and Right to Work are currently arranging the route of the march, and initially talks have made it clear that the march will go past the ICC and through Birmingham City Centre, but the exact route needs to be finalised.

The assembly point has provisionally been set at Moor Street Train Station, for 12 noon.

Posted by Rugby Green Party at 08:13 No comments: