RUGBY AGAINST THE CUTS
PO Box 4123 Rugby CV21 9BJ
http://rugbyagainstthecuts.blogspot.com
rugbyagainstthecuts@googlemail.com
Convenor and Press Officer: Pete McLaren pete.mclaren@virgin.net 07881 520626
Treasurer: Julie Weekes Trade Union Liaison: Roy Sandison; Martin Eversfield
Rugby Against the Cuts held a Lobby of Rugby Borough Council last night. They gave out leaflets outlining the alternatives to cutting public spending in order to reduce the economic deficit.
“Tory councillors were clearly rattled, either by our protest, or because they now know we are going to ensure there is an anti cuts candidate in every Rugby ward this May,” spokesperson Pete McLaren explained. “The Council Leader, Cllr Craig Humphrey, told us as he went into the Town Hall that the Council would not be agreeing any cuts in Rugby tonight. Fellow Conservative Councillor David Wright went further, suggesting to protesters that Rugby people would not be affected by any decisions about cuts agreed at that night’s meeting.”
“It was good that Cllr Wright came to talk to us, but it is hard to understand his motivation for making these comments. Staff have been told their jobs are at risk,” he continued. “The Tories are ideologically committed to imposing public spending cuts – so why are two of their local leading members telling us otherwise? Rugby Council has agreed over £4 million of cuts which, according to the Papers going before Council, included:
Geoff Dewhirst (Warwickshire Branch Secretary of Unite – Youth Work section) added, “These cuts come on top of those agreed last week by Warwickshire Council, which will decimate the youth service, library provision, and care for the elderly. They will react with each other to make the situation worse for service users. Some services have inputs from both Rugby and Warwickshire Councils.”
“It is not true that cuts to ‘backroom’ posts have no effect on services, and Councillors know that. Services to our communities are often created by, and always enhanced by, networked relationships between agencies. Take even one piece out of this “backroom” network, then services become less responsive, imaginative projects aborted, and only bare, statutory requirements are met.”
NOTES
Taken from Rugby Against the Cuts web site
Posted by Rugby Green Party at 19:23 No comments: 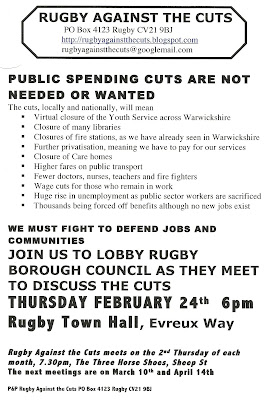 Fighting the Cuts – Lobby of Rugby Borough Council – Thursday 24th February from 6pm
Rugby Against The Cuts have called a lobby of Rugby Borough Council on the 24th February
Please support our community by making your voice heard. Visit http://rugbyagainstthecuts.blogspot.com/ for update on the fight against the cuts in Rugby, Warwickshire and Nationally.
Posted by Rugby Green Party at 14:28 No comments:

Posted by Rugby Green Party at 10:05 No comments: