Anti forced Academy school campaigners, Lorna Dunleavy and Steve Wright will be standing for the Green Party in the forthcoming County Council Elections on 2nd May in the Brownsover Division (which covers Newbold, Brownsover & Benn).

Lorna and Steve as members of  Rugby Parents Against Academies and Rugby Academy watch (FB) are highlighting the need for parents and  communities  to be vigilant over attempts to coerce schools to become academies.They echo professionals concerns that:
·         Any extra money that an academy gets is taken away from the common LEA budget.
·         Schools and pupils hit most will be those left that will need Local Authority support most.
·         Academies can “cherry pick”their pupils to make it easier to reach their targets.
·         Focussing on targets means less time will be devoted to teaching a broad curriculum.
·         £8.3Bn has been spent only to replace the existing,democratically accountable system with a fragmented group of private companies.

PARENTS AND COMMUNITY NOT CONSULTED MEANINGFULLY
Parents at Newbold Riverside were mainly kept in the dark about the  intentions to give the school to the Reach2 and given no vote over the future of their school - a school that is a much loved part of the local community.No mandate is required from voters!!!
.
An Academy can mean that local Governors can be removed and unqualified teachers used and even regulations on healthy food can be ignored.

Steve Wright who is the other Green Candidate in this two Councillor seat is heavily involved in seeking assurances about the future of his own local community school (St Andrews Benn) in the Town Centre and a regular poster to the very informative Rugby based 'Academy Watch' Facebook site - that can be found here http://www.facebook.com/rugbyparentsagainstacademies?fref=ts

NO SECRETS PLEASE!
Lorna, Steve and the Green Party want parents and the local community to be fully informed and involved in any plans for our local schools.

At the moment it seems decisions are being made about our schools behind closed doors and this it totally unacceptable – no one now or in the future should give away our schools without the parents and local community having a REAL SAY and VOTE!

LOCAL PEOPLE HAVING A SAY!
Lorna Dunleavy and Steve Wright were both born and bred in Rugby and care about Rugby and like most other residents in the town have concerns about the poorly planned turning out of the street lights, health concerns about incineration, cuts in benefits and the bedroom tax, and the closure of local shops and community resources.
Rugby needs Councillors like Lorna and Steve who will really reflect local concerns and take action when asked by local people and the local community 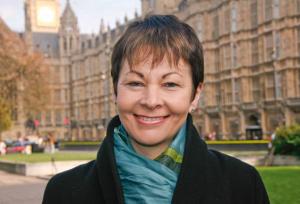 CAROLINE Lucas, MP for Brighton Pavilion, led the Opposition Day debate on the Government's bedroom tax policy in February together with MPs from Plaid Cymru and SNP.
Responding to Iain Duncan Smith's announcement today, she said:
"The eleventh hour decision to exempt foster carers and families with children in the armed forces from the new bedroom tax is a huge win for social justice - and a clear sign that the Government is beginning to recognise just how flawed and unfair this policy is.
"However, ministers should now go further and exempt disabled people too in order to protect the most vulnerable from losing their homes to this cruel and counterproductive measure." 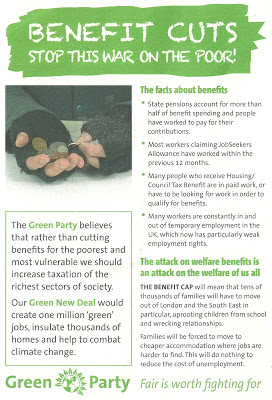 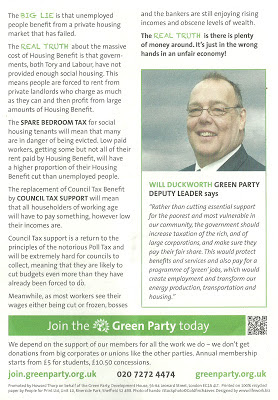 Posted by Rugby Green Party at 12:45 No comments: