Rugby Observer report on the Jarrow March in Rugby

THE JARROW Marchers rolled into Rugby this week protesting against the Government's handling of the continuing economic slump.
Around 50 marchers - recreating the famous 300 mile protest of 1936 from the north east to London against poverty and unemployment - arrived in the town centre yesterday (Tuesday).
They marched and protested against the Government's handling of rising unemployment, with local trade unionists and socialist political groups backing them.
The marchers first arrived at the Sheaf and Sickle pub in Long Lawford for lunch before a rally at the clock tower.
Tonight (Wednesday), the marchers will attend an anti-cuts meeting at which railway and maritime workers union leader Bob Crow will address them. It takes place at the United Railway Club on Railway Terrace. 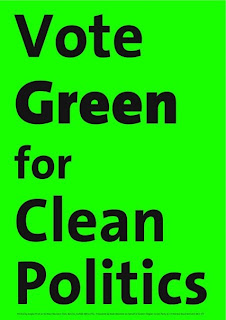 As all three main political parties (Tories, Labour and Lib Dem) reneges on their election promises to support the right of people to cast an opinion on the EU. The Green Party keeps its promises!
Caroline Lucas Green Party MP for Brighton Pavilion will be voting to allow the citizens of the UK to finally have their say on the European Union!.

Yes to an EU Referendum: Green MP calls for chance to build a better Europe

A referendum on the UK's membership of the EU is a vital opportunity to create a more democratic and accountable Europe - with a clearer purpose for the future, said the Green MP today.

Caroline Lucas, MP for Brighton Pavilion, has tabled an amendment to the Conservative Backbench motion for a referendum on the UK's membership of the EU, calling for ‘radical reform of the EU' to increase transparency and give Member States more control over their economies (1).

Speaking ahead of the Commons vote on Monday, Lucas said:

"I support a referendum on our membership of the EU because I am pro-democracy, not because I'm anti-EU - and because I want to see a radical reform of the way Europe operates.

"The EU has the potential to spread peace and make our economies more sustainable, and to promote democracy and human rights, at home and throughout the world.

"But it must urgently change direction, away from an obsessive focus on competition and free trade and towards placing genuine co-operation and environmental sustainability at its heart.

"Thanks to the bureaucratic and remote way which the EU works, many people today are no longer sure what is it for. So the challenge now is to make those institutions more democratic and accountable - and to develop a more compelling vision of the EU's role and purpose.

"A referendum would allow the space for that debate about the future of the Union to occur, and to ensure that the goals of the European project really are in the best interests of EU citizens."

(d) seek to build support for radical reform of the EU, increasing its transparency and accountability, refocusing its objectives on co-operation and environmental sustainability rather than competition and free trade, and enabling member states to exercise greater control over their own economies.

Posted by Rugby Green Party at 08:37 No comments:

MARCH WITH THE JARROW MARCHERS IN RUGBY ON TUESDAY 25TH OCTOBER 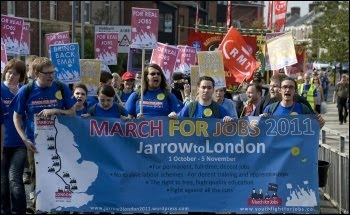 The excellent initiative to draw attention to the plight of young people, The Jarrow - London March organised by the Youth Fight For Jobs will be visiting Rugby on the way to London on Tuesday 25th October.

The march has been enthusiastically received by all the communities it has visited and we must do the same in Rugby!

Rugby Green Party members will be meeting the marchers, with our excellent new banner at the Sheaf and Sickle Pub, in Long Lawford and taking part in the march into Rugby at 2pm for the rally at 3pm.

please come along and show support!

Youth Fight for Jobs, a campaigning organisation, is marching from Jarrow to London, starting on 1 October 2011. This is on the 75 anniversary of the Jarrow Crusade, when 200 unemployed workers took a similar route to raise awareness of mass unemployment. Today, as unemployment and youth unemployment soars, the ConDem coalition is axing jobs and services; this new campaign is absolutely vital.

On the Jarrow March we are demanding:

Posted by Rugby Green Party at 03:52 No comments: 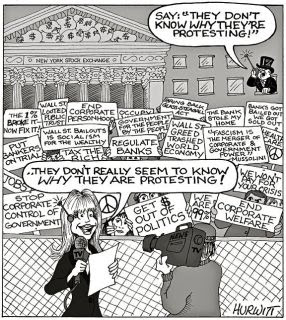 Posted by Rugby Green Party at 04:22 No comments: