LIARS! over cuts and false promises

As the BBC have pointed out the three main parties have been not been telling the truth about the real levels of cuts they will need to undertake in public expenditure and have been making promises in protecting services that they have no intention to protect. New Labour are planing to make £47bn, the Lib Dems £51bn and the Tories £57 worth of cuts.
This will mean in Rugby - St Cross closing, Fire Stations closed, Youth Clubs closed, Pensioners left to fend for themselves, Schools closing with mass unemployment stalking the streets of Rugby again - Voting Green means saving jobs and services by taxing the rich, stopping tax evasion, Getting rid of PFI, limiting the wages of Chief executives of councils and public bodies, a Robin Hood tax on Bankers and Banks, stopping ID cards - their is wasteful public expenditure and only the Greens are prepared to action without threatening our public services and jobs.
Posted by Rugby Green Party at 06:40 No comments:

OUR TOP 10 PRIORITIES FOR A GREEN AND SUSTAINABLE RUGBY

The Green Party has been transforming politics in towns and cities across the UK. Green Councillors have saved post offices, made streets safer, and are well known for working hard for local communities because they believe in putting the community first.

No cuts to Jobs and services – A real threat hangs over Rugby, losing core services and facing mass unemployment.

No closure of Hawthorn Ward – SAVE ST CROSS!

Expanding properly funded Youth clubs into every community to challenge the scourge of drugs and crime so damaging to local families and communities.

No to Incineration – it damages both health and the environment.

Promote buses and an integrated travel provision - A flat fare of £1 in the Rugby Borough – keep free transport for Pensioners, the disabled and introduce for under 16’s.

Cut fuels bills by providing free Insulation for all homes in Rugby – It’s been done by other local authorities through Green Party pressure by making the utility companies pay.

Democratise the planning process so that local communities can have a fair and proper say through independent facilitators.

Stop the plan to build at the Masts Site – it’s ill conceived and unsustainable!

FAIR IS WORTH FIGHTING FOR!

Posted by Rugby Green Party at 12:36 No comments:

General election - 6 May 2010 Candidates for Rugby

Posted by Rugby Green Party at 09:42 No comments:

YOUR CHANCE TO QUIZ THE GENERAL ELECTION CANDIDATES 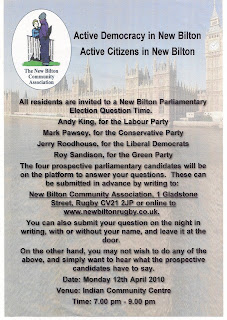 The 1st of 3 what should be big public meetings taking place in Rugby, I have been invited to as the Green Party Candidate. This one is in New Bilton on Monday night.

Posted by Rugby Green Party at 16:13 No comments:

Rugby Green Party are standing in 10 seats at the local elections - Admirals, Benn, Bilton, Brownsover South, Caldecott, Dunchuch & Knightlow, Earl Craven (Wolston), Newbold, New Bilton and Overslade. Well done to everyone for standing and offering a positive choice to local people.
Don't forget to Register to Vote and ask for a postal vote if you are not able to get to the Polling Station on the 6th May 2010
Posted by Rugby Green Party at 15:27 No comments: 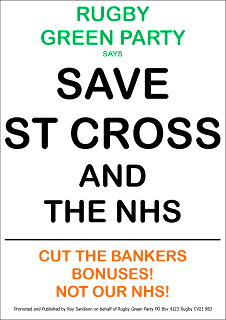 Greens say NO to the closure of

Roy and the Green Party oppose the attempts to close Hawthorn ward at the Rugby St Cross hospital – “Why should Rugby’s elderly sick and infirm people be moved to Nuneaton? These cuts must be fought by our community in Rugby – when Labour and Tories say the NHS is safe in their hands – the reality are these sort of core services and even more are threat from the planned cuts in public spending by all three main parties – We must fight and fight again to defend these services so needed in our community” Say Roy Sandison

Roy who is a former mental health worker says “Patients that have these sorts of conditions need familiar surrounding and the involvement of their loved ones in their treatment of dementia and other illnesses, not being decanted off to an area they do not know and families will be expected to travel so limiting their input into their care needs.”

“Andy King Labour candidate for Rugby appears to indicate some kind of “clinical need” for this cut – I have to say this is not apparent to me and most of other residents in Rugby, All I see and no doubt others see is a decision to cut services with no recourse to what is clinically needed for these very vulnerable people.

If their are any structure problems with the existing ward – then use the existing capacity I know and others know DOES EXIST at the St Cross site to resolve the problem.