BUDGET 2012: WE ARE BAILING OUT THE RICH AGAIN! 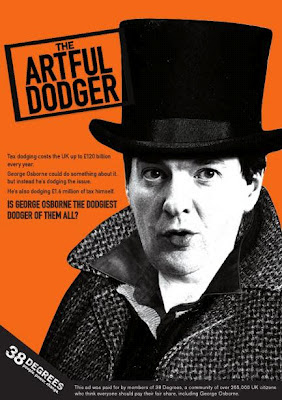 (Recent poster produced by the 38 Degrees campaign group)
CALLOUS CONDEM BUDGET ATTACKS US!
Callous Tories and Lib Dems are continuing with the ideological attack on working people's living standards by sneaking in a massive tax cut for the rich and a £3.5bn on tax relief for pensioners and a massive £10bn additional cuts in benefits for the growing numbers of unemployed people the victims of their economic policies.

Caroline Lucas, Green Party MP has condemn the budget as increasing the chances of going into a double dip recession through cuts to public spending and the inability of people to spend money
due to pay cuts and mass unemployment.

- Coalition to bulldoze ahead with ‘growth at any cost' planning reforms

The 2012 Budget will do nothing to deliver a greener or more prosperous economy - and shows the Coalition completely failing the fairness test, said the UK's Green MP today.

Caroline Lucas, leader of the Green Party and MP for Brighton Pavilion, said:

"This true blue Budget is the nail in the coffin for this Government's ‘greenest ever' pledge.

"The determination to plough ahead with growth-at-any-cost planning reforms and aviation expansion, throw money at North Sea oil and gas, and ignore the potential of green energy shows that this administration's environmental policy is blue, not green.

"The Chancellor's stubborn refusal to accept that investment in clean renewable energy and energy efficiency can simultaneously tackle the environmental crisis, stabilise the UK economy and create jobs is depriving this country of a more prosperous future."

Lucas continued: "Meanwhile, Osborne's toxic tax cut for the richest is a slap in the face for the millions of working people across the country fighting a losing battle against falling wages, job insecurity, rising living costs and severe public spending cuts.

"Having failed to secure either a genuine mansion tax or a tycoon tax to compensate for the Tories' unfair 50p rate cut, disillusioned Liberal Democrat MPs must once again be asking themselves what purpose they are serving in this Coalition.

"The fact that public sector net borrowing hit £15.2bn in February is clear proof that Osborne's destructive austerity drive is failing even on its own terms. And given the increasing levels of joblessness, the Government's blind belief in the private sector to compensate for huge public sector job losses - 270,000 last year - looks increasingly delusional.

"We have a youth unemployment crisis of staggering proportions and a whole section of society trapped in low paid work. While there were some positive measures to tackle this in today's Budget, it's clear that the Government needs to do far more."

The Green MP concluded: "This Budget is a regressive document from a regressive Government. It will do nothing to deliver a fairer or more prosperous UK economy - and it certainly won't deliver a greener one."

Posted by Rugby Green Party at 13:05 No comments: 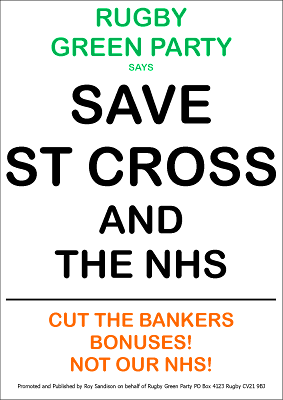 Party spokesperson has slammed local Lib Dems for Nick Clegg's support for privatisation of the NHS and also their own shared responsibility for the threat to our NHS and St Cross as much of that belonging to Tory MP for Rugby Mark Pawsey.
Roy writes;
Its is really sickening to see local Lib Councillors pervading their so called loyalty and independence to the people of Rugby at the same time as their good friend and party leader Nick Clegg commit their support for the ideological destruction and privatisation of the NHS.

St Cross, since the destruction of services under the last Pawsey (Jim) to ‘represent’ Rugby is more at risk then most NHS hospitals from this CONDEM plan and we have already seen in Rugby the dripping cuts of services and wards closures for our elderly and mentally ill people and our local people sent into exile into other towns for being ill.

In the meantime, operation Clegg and the enjoyment of the trappings of government power seems to be the only priority that our good friends in the Libs Dems seem to care about, and they clearly hope that we, the electorate in Rugby and else will be hoodwinked into voting for them at local level in May because after all they really care about Rugby? The biggest sick joke of it all!

Sorry to say, unless Rugby has declared itself an independent state or we exist in a parallel universe the fact is that Rugby and its people share the same threat to the NHS as any where else in the country and despite what appears to be slight of hand ‘independence’ nuisance promoted by the likes of Mr Roodhouse and his Lib Dem gang of Councillors to distance themselves from Clegg, he and they are has responsible for the threat to the St Cross as much as Pawsey (mark 2).

Posted by Rugby Green Party at 09:12 No comments: