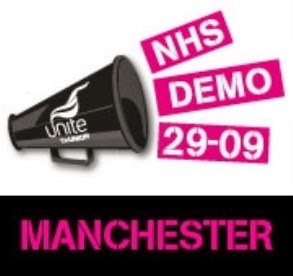 Help us contain the threat - join the big NHS queue to Save our NHS, outside the Conservative Party conference in Manchester on Sunday 29 September.
The TUC organised national demo will set off from Liverpool Road, M3, making its way though Manchester city centre and around the conference centre on two sides, before heading out for a rally in Whitworth Park M15.

What better way to get the attention of David Cameron’s Conservative party than thousands of ‘noisy’ people on the streets of Manchester forming a human ‘quarantine’ around their political conference.

Come dressed as walking wounded in hospital gowns and wrapped in bandages or as health worker zombies, and bring your noise makers. We're organising transport from the regions, find out more by following the link below.

Will Duckworth - Green Party deputy leader - conference Speech - Why we need an alternative to Capitalists self interest!

Disabled activists from grassroots campaigns Disabled People Against Cuts (DPAC), Black Triangle and Mental Health Resistance Network have occupied the BBC building in London to protest against the role the media are playing in worsening attitudes towards disabled people and a complete failure to give space to the realities of what this government are doing to disabled people.

Ironically just last week the BBC reported on a research report by Scope which highlighted how things have got worse for disabled people since the Paralympics, but the BBC themselves have contributed to this situation by a lack of balanced or accurate reporting. In fact their coverage of the research angered disabled people by spectacularly failing to draw any links between the worsening conditions disabled people are facing and government policy.
Despite the fact that Iain Duncan Smith has been pulled up before the Work and Pensions Select Committee for misrepresentation and manipulation of figures and statistics, the BBC continues to report information released by the DWP as fact.
This resulted in a situation over Easter weekend where disabled people, about to face an austerity armageddon with benefits and income essential for their survival brutally slashed away, also had to contend with national media coverage that encouraged a view of us as benefit scroungers and cheats. It has since been proven that information released by the DWP ahead of the changes in April such as the figures for all of those who had supposedly stopped ineligible claims for incapacity benefit due to the tightening up of the benefit system, were misrepresentations with no basis in evidence. Just the smallest amount of research would have revealed to the BBC that they were about to report lies as objective fact. In addition to the misrepresented figures and statistics which the BBC promoted, further weight was given to the government’s propaganda by the succession of government ministers who were then given air time to continue to peddle their falsheoods. Where people were invited on to present an alternative view, they were non-disabled people from national charities. Firstly these people do not represent us, and secondly there are many more informed disabled campaigners who could have exposed the lies and misrepresentations.
Time and again the government and front bench Ministers have lied to justify policies which are causing the deaths of disabled people. Only last week the Disability News Service has had to raise formal complaints against the DWP press office for deliberately presenting false information about the level of spending on disability in the UK. Meanwhile the situation in the UK has gained international notoriety. The UN are currently in the UK to investigate and report on what the UK is doing through its housing policies. Solidarity protests outside the British Embassy have been organised by supporters in Canada.
Yet time and again the BBC have not only failed to report on what is happening but to contribute to public ignorance of what is going and to inflame hostility with questions such as “Why can’t disabled people take their fair share?” It is well evidenced that disabled people are bearing the brunt of austerity measures with those with the highest level of support need being hit nineteen times harder than the average citizen. To even put the question why can’t we take our fair share is damaging and in contempt of disabled people’s basic rights to be treated with respect and free from hostility.
For more information please contact Rosa Wilkinson on 07505144371.
Notes for editors:
1) Disabled People Against Cuts was set up in October 2010 to oppose the government attacks on disabled people. Our week of action last year highlighted the hypocrisy of Atos’ sponsorship of the Paralympic Games and culminated in a protest of 700 people outside Atos headquarters and the occupation of the DWP building by disabled activists and a guide dog for 2 1/2 hours. We are now in the middle of our week of action for 2013: Reclaiming Our Futures, which is focused on the wide range of attacks that are pushing back disabled people’s rights be decades.
2) DPAC report on DWP abuse of statistics: http://www.scribd.com/doc/149776210/DPAC-Report-on-DWP-Abuse-of-Statistics-Final-22-June-2013
3) http://disabilitynewsservice.com/2013/08/ministers-silent-after-being-caught-pulling-lies-out-of-thin-air/
4) Campaign for a Fair Society: how the cuts are targeting disabled people revealed the extent to which austerity is disproportionately impacting on disabled people
- See more at: http://dpac.uk.net/2013/09/for-immmediate-release-dpac-do-the-bbc/#sthash.jHB28XZ0.dpuf
Posted by Rugby Green Party at 11:08 No comments: