Come to London and make your voice heard. The local Unite trade union have put on a free coach to London at 7.30am from outside the Town Hall on Sat 20th Oct, to ensure as many local people as possible can protest against the cuts. Please contact rugbyagainstthecuts@gmail.com and they will pass your details onto the organisers of the coach. 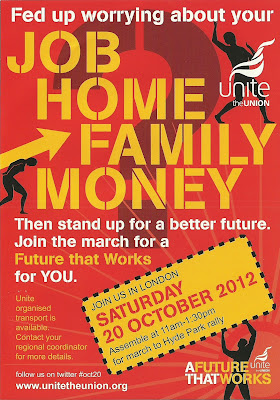 Posted by Rugby Green Party at 15:00 No comments: 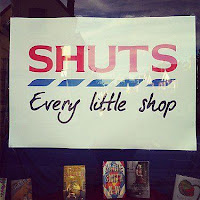 Rugby Green Party has raised its concerns that Rugby may become a ‘Tesco Town’ if local planners and Councillors continue to allow massive multinationals supermarkets to move into the ‘local shop’ market in the town, this after 3 ‘local’ Tesco’s have ben allowed to be opened in the town in the last few years despite opposition from local communities they are sited in.

From a nation of shopkeepers to Clone Town Britain?
The UK's biggest supermarkets are grappling for ever greater market share. Small independent stores and suppliers, and ultimately consumers, are paying a direct price in the face of unfair competition.
‘For the past three years small independent shops have been closing at a rate of 5,000 per year in the UK. This has risen alarmingly in 2009, when 25,000 small shops - 10per cent of the total - closed in the first nine months of the year. There are estimated to be another 50,000 shops teetering on the brink’ (Federation of Small Businesses 2012 survey).
TESCO Towns coming to Rugby
Yes if Brownover and Bilton is anything to go by!
Peter Reynolds (Rugby Green Party Chair and Brownsover Resident says “We have seen 3  ‘local’ Tesco’s open recently in Rugby – in Bilton, Brownsover and the station area that will/are impacting on local shops”
“In Brownsover – my area, local residents have the worse case scenario where by the local public house (which could have been transformed into a valuable community resource) now has a Tesco in its place and local community  facilities and shops are under threat of closure.”
Peter continues “I am especially angry because Tesco was allowed to come to Brownsover with very little consultation with local residents, but with the whole hearted supported of Councillors who actually it appears went as far as lifting a covenant on the Merry Monk site to enable TESCO to come to Brownsover.”
Peter says ‘Greens recognise the important of independent shops and the important  role of well managed community resources such as community centres and pubs,  as they can act as the glue to pull together the community – instead we are now likely to see sterile and empty building in our local communities if the ‘Tesco town’ is not checked”
For Information
Tesco Town is slang for an area where one retailer has large market share.
The term Tesco Town comes from the name of the retailer Tesco, but is used to describe any area dominated by one particular retailer.
Bicester is one of the UK's best known Tesco-towns, operating six stores in a region with a population of 29,000. Featuring a Tesco Extra on the southern side of town, near the Bicester Village designer outlet, a Metro Tesco Metro in the town centre and a further four Tesco Express stores around the general neighbourhood and community areas.
In 2007, it was reported that in Inverness, where there are currently four stores in the small city, Tesco had a 51% share of the market for groceries in the city, the highest rate of penetration for any locality in the UK.
Worthing, West Sussex has been described as a Tesco Town with 9 stores and the 10th on its way this February. These include one the largest Tesco Extra Stores in the UK, 8 Express Stores and 1 Esso with Express.
Worcester is also classed as a Tesco Town as they have 6 stores around the area including 2 Superstores, 3 Express and 1 Esso Express stores.
Reading, Berkshire has been described as a Tesco Town by its residents, with 2 Superstores and 8 Express stores with more planned.
Bedford has also been described as a Tesco town with the town having a Tesco for every 7,500 people
From http://en.wikipedia.org/wiki/Tesco_Town
Posted by Rugby Green Party at 12:24 No comments: