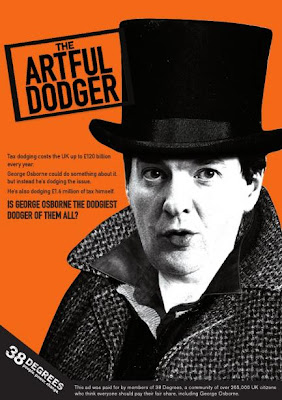 Posted by Rugby Green Party at 17:47 No comments:

We the undersigned are outraged at Warwickshire County Council’s proposal to:
“Cease the whole of the Youth Service”.
We know how vulnerable young people can be. However, Warwickshire County Council is withdrawing the very service that is proven to work successfully alongside them.
We consider that this proposal contradicts the leader of the Council, Councillor Alan Farnell’s claim to “protect the most vulnerable and the front-line services that support them,” and we are calling for its immediate withdrawal.
Please visit this site to add your name http://www.petition.co.uk/withdraw-proposal-to-cease-the-whole-of-the-youth-service-in-warwickshire
Posted by Rugby Green Party at 23:21 No comments:

Save the EMA day of action | 13 December 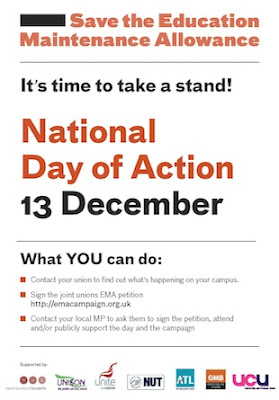 The Educational Maintenance Allowance is a small grant available young people aged 16-19 who stay on in education. It is means-tested and students can receive between £10 and £30 a week. Last year, 635,000 students received EMA and 80% of these received the full £30. In Leicester, as many as 4/5 students receive it.

The government plans to completely scrap the EMA, despite a pre-election promise from Michael Gove - anybody see a trend here? This will have a massive impact of young people from poorer backgrounds, some of whom will simply not be able to afford to stay in education. This is turn will put more jobs at risk.
Posted by Rugby Green Party at 13:57 No comments:

In an unprecedented move, the Green Party today offered free membership to people under 30 or in full-time education.

Any student or young person who applies to join the Green Party before 1 January 2011 will pay no subscription for the coming year.

“I want students and young people to know there is a political party that still cares about their future, and that will keep fighting for a fairer future and will not give up on doing the right thing.

“We have to keep fighting, because we can’t leave the future of our country and our planet to people who want to run things primarily in the interests of big business and the wealthiest people.

“Politics is important and it’s time to reclaim it. I want to extend the warmest possible welcome to all new members, but not least to students and young people who are having such a difficult time at the hands of the other political parties.”

Greens want “a society which values mobility and inclusiveness”

Caroline, who was elected as Britain’s first Green MP in this year’s general election – and who has stood strongly by the Green Party’s policy of universal free education – said last night after the tuition fees vote:

“This is a dark day for the future of higher education in this country. The huge hikes in tuition fees, together with the scrapping of Educational Maintenance Allowance and proposed cuts in college funding, amount to nothing less than a Government assault on our young people – and an attack on the principles of universal education. Many people may be priced out of going to university as a result of today’s vote – and those who do go are likely to be saddled with massive debt. This is unacceptable for a society which values social mobility and inclusiveness.”

2. Students can normally join the Green Party for £5, as opposed to the standard membership rate of £31. Many people, however, pay higher membership fees to help the party fund its campaigns. Donations are always welcome, as the Green Party receives no financial backing from unions or big businesses as Labour and the Conservatives do, but gets the bulk of its income from members and ordinary supporters.

Posted by Rugby Green Party at 12:06 No comments:

The Green Party is emerging as the only one of the main UK-wide political parties which has consistently supported the abolition of tuition fees.

Earlier this week, Green Party Leader and Brighton Pavilion MP, Caroline Lucas, co-sponsored an Early Day Motion (EDM 1130) with Lib Dem MP Greg Mulholland, calling for the vote on raising tuition fees to be halted, noting that "the government has failed to convince many people that its proposals will be fair and sustainable" (1). She is co-sponsoring an amendment to the Government's Tuition Fees Motion to the same effect.

The Green Party Leader, who will be speaking at the rally outside Parliament on Thursday, said:

"The government's plans to saddle young people with huge debts, and to scrap the Educational Maintenance Allowance which has been so successful in enabling more young people to stay on in education, are hugely destructive, and completely unnecessary.

"There are alternative ways to fund education, including a more progressive taxation system. For example, a business education tax levied on the top 4% of UK companies, as proposed by the University and Colleges Union (UCU)(2), would require business to pay its fair share for the substantial benefits it receives from higher education.

"Raising corporation tax to the G7 average would generate enough annually to abolish tuition fees, and increase UK investment in higher education to the average for other comparable countries, while leaving 96% of companies in the UK unaffected by the change, and still leaving the UK's main corporation tax below that of France, Japan and the US."

"The Green Party believes that education is absolutely vital for people to be able to participate fully in society, and as such, access to learning should be as democratic as possible, with no person made to feel excluded by prohibitively high costs."

"The amount of student debt this rise will bring, along with the lack of affordable housing and high youth unemployment, is driving the gap between our generation and previous ones even wider."

1. Research published by university think-tank million+ and London Economics suggests that the majority of students (60-65%) will be worse-off under the new proposals, and that social mobility and participation will also be adversely affected, "Fair, progressive and good value?", (30 November 2010),http://www.millionplus.ac.uk/file_download/184/Fair

Posted by Rugby Green Party at 08:45 No comments:

NO SMOKE WITHOUT FIRE AT RUGBY CEMEX? 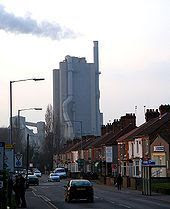 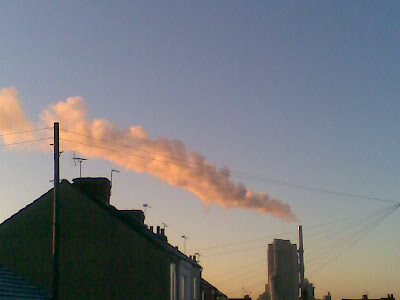 New Bilton Green Party (a local ward party of Rugby Green Party) have written to the Environment Agency to demand answers over concerns raised by local residents in New Bilton with the local Green Party over pollution and health fears from 'smoke' emanating from the CEMEX Plant, which is in the middle of New Bilton and Rugby (70,000 population) on Sunday 5th December.

CEMEX a massive multinational are burning a combination of tyres and waste at the plant to provide a cheap fuel to make cement and have faced numerous actions by the Environment Agency including massive fines over its operations in the town.

As the letter (below) sent to the Environment Agency’s Officer David Hudson covering the Lawford Road site, indicates the plant has recently (August 2010) suffered an uncontrolled fire at its waste storage facility and local residents are understandably concerned - We in the Green Party also share these concerns!

A number of local residents from New Bilton have been in contact with ourselves to raise concerns about the amount and nature of what appeared to be smoke emanating from the CEMEX Plant in Lawford Road Rugby on Sunday 5th December 2010.

I personally also witnessed the unusual colour, quantity, behaviour and direction of the smoke, but was unable to make contact with the Environment Agency at the time due to the need to deal with other important issues, but did remark to the person I was with at the time my concerns.

I would ask you to provide full details of any investigation that the Environment Agency may have undertaken and the outcome. Please also confirm that the local residents who made contact with you have also been provided with this detailed information as well?

We note in the ‘Environment Agency Update number 4’ (August 2010) to the Community Cement Engagement Group (an organisation we may add unfortunately largely discredited in the eyes of many local people due to the removal of local skilled environment groups) of a recent fire resulting from the storage of waste for burning at the plant and we would ask you to provide a detailed response on the outcome of your investigation of this incident.

Please note, we will forward your response to the local residents who have contacted us and provide information for local residents in New Bilton and Rugby via our website.

Posted by Rugby Green Party at 05:31 No comments: 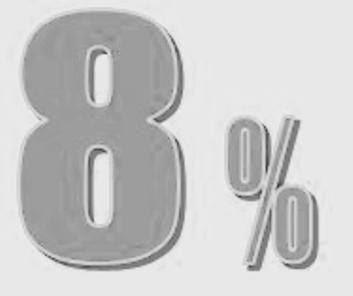 Tonight’s YouGov poll for the Sun has topline figures of CON 41%, LAB 41%, LDEM 8%. It’s the lowest Lib Dem score YouGov have ever shown, and as far as I can tell the lowest Liberal Democrat score any pollster has shown since September 1990, over 20 years ago.

I’ll add my normal caveats about not getting too excited about a single poll, new extreme highs and lows for parties do tend to be the outliers, but nevertheless, the fact that we’ve got our first 8% for the Lib Dems suggests that their support is still on a downwards trend. It is probably no co-incidence that this comes after several days of the Liberal Democrats internal ructions over tuition fees have been all over the political headlines.

Posted by Rugby Green Party at 16:28 No comments: 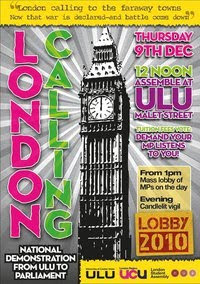 Posted by Rugby Green Party at 15:41 No comments:

400 PEOPLE MARCH IN COVENTRY AGAINST THE CUTS IN IMPRESSIVE SHOW OF STRENGTH!

From Rugby Against The Cuts - http://rugbyagainstthecuts.blogspot.com/
Rugby residents joined the impressive 400 strong march in Coventry on Saturday - the demonstration supported by many local trade unions and students leading the fight against Clegg's Lib Democrats sell out over student Tuition Fees and their support for the abolishment of the Education Maintenance Allowance (EMA) laid the basis for the first of many protests to come.
Youth workers in UNITE also joined the protest in large number from Warwickshire (where the Youth Service will cease under Tory plans) and Coventry where Labour intend to make large cuts. The rally agreed to support both set of workers in their struggle. 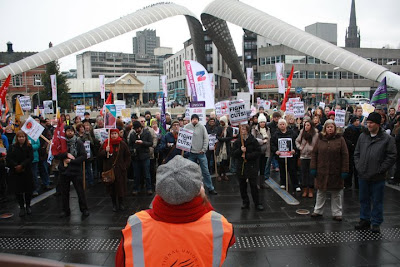 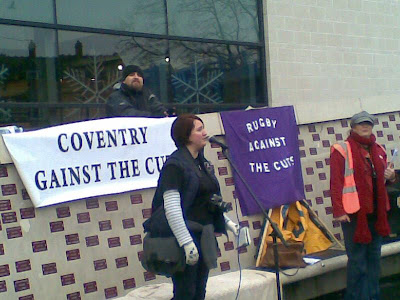 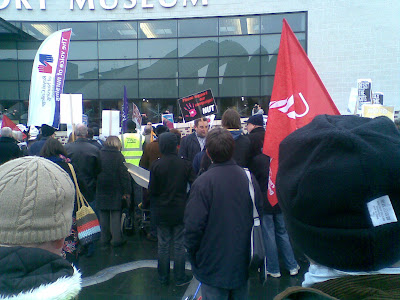 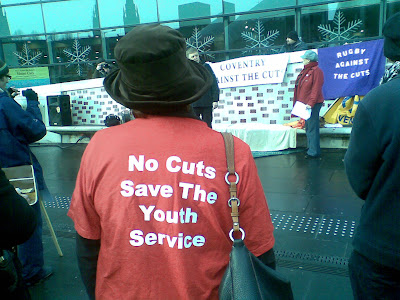 Please visit the Coventry Against the Cuts website for further reports about the protest and more pictures.- http://coventryagainstthecuts.blogspot.com/
* Rugby Green Voice comments - Greens from Coventry and Warwickshire also support the protest in numbers.
Posted by Rugby Green Party at 14:47 No comments:

4 Dec 2010 March on Parliament for a Zero Carbon Britain 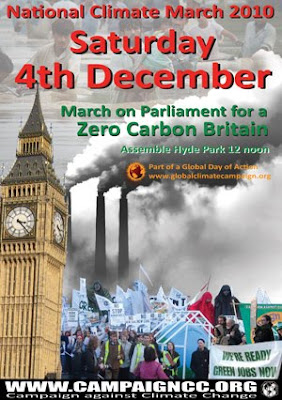 Part of a Global Day of Action on climate(www.globalclimatecampaign.org) on the Saturday midway through the UN Climate Talks in Cancún, Mexico.
Posted by Rugby Green Party at 16:29 No comments:

COVENTRY AGAINST THE CUTS SAYS: DON'T LET COVENTRY BE TURNED INTO A GHOST TOWN AGAIN! 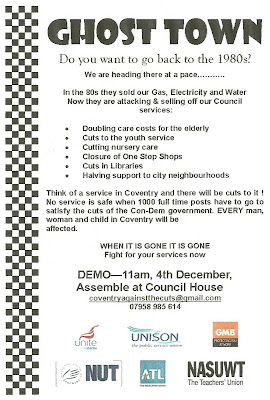 From Rugby Against The Cuts - http://rugbyagainstthecuts.blogspot.com/
Posted by Rugby Green Party at 16:15 No comments: