ALL OUT IN SUPPORT OF PENSIONS, JOBS AND OUR SERVICES - 30TH NOVEMBER!

From Rugby Against the Cuts - http://rugbyagainstthecuts.blogspot.com/
An estimated 3 million workers will be on strike against the CONDEM Government attacks on pensions, jobs and our services. Other workers such as nurses, firefighters, police officers and the Trade Union movement as a whole will also be supporting the protest against the 'race to the bottom' in respect of pensions and services.
Rugby Against the Cuts fully supports workers in our town taking action by visiting picket lines and attending the marches and rallys taking place.
* 10.15am Cathedral Steps, Priory Street Coventry March/Rally
* 12 noon TUC March through Birmingham - Assemble Lionel
St/Livery St car park
* 1.30pm Rally with TUC Gen Sec Brendan Barber and others
National Indoor Arena, Birmingham
Midlands TUC are organising a march and rally in Birmingham to coincide with the TUC’s national day of action for Pensions Justice onWednesday 30th November, involving up to 20 unions and 3 million workers. 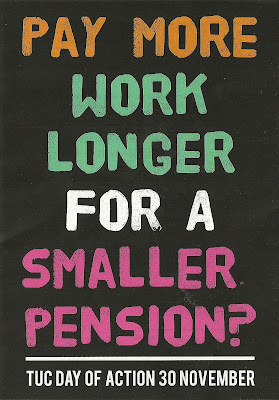 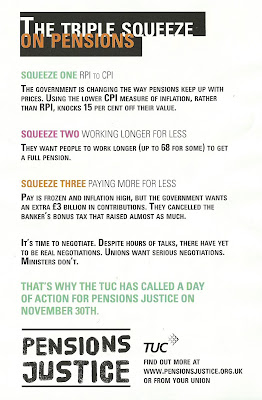 Posted by Rugby Green Party at 08:18 No comments:

The real voice of the 1st world war Harry Patch, 109, at Passchendaele

Posted by Rugby Green Party at 13:56 No comments: 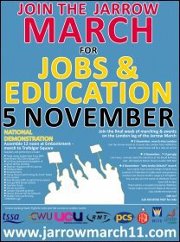 After marching 330 miles the Jarrow March for Jobs arrives in London. Following in the footsteps of the 1936 Jarrow marchers who walked to London against unemployment.
Assemble Temple Place on Embankment 12noon!

Come and join the end demostration and rally in Trafalgar Square.


Book you place on the coach from Coventry!
This Saturday the march ends in London, and coaches are booked from across the country. There is a bus from the Coventry and Warwickshire area. We would encourage as many trade unionists as possible to attend this.
Meet at the Sports Centre in Cov, 9am. It is £4 waged, and £2 unwaged.
Ring Lenny on 07530 429441 to book.

On our journey to Coventry we passed; two closed down Peugeot factories, a closed Marconi site and a closed GEC building. This is a huge amount of jobs lost to a small area, jobs which are badly needed. We also passed a local Tory council; chanting and singing “if you hate the torys” we definitely made our presence known. we had lunch at the Sheath and Sickle pub where we had a brilliant reception and there were journalists there to meet us. When we got Rugby we had a rally in the town centre hosted by the local anti cuts group,Rugby Against the Cuts. The speakers were fantastic; Martin Powell Davies – NUT, Peter – TUSC, Roy – Green Party, Lenny Shail – Socialist Party and Matt Whale and Alex Moore from the march. We then walked down to the Griffin pub where tea had been put on for us by the RMT. After discussion and drinks we went back to supporters houses to sleep. Thanks to Lorna for putting me up, had some great conversation. Also thanks to her son, Paul and her neices and nephews who drew the marchers some pictures of the march. Everyone loved them

Posted by Rugby Green Party at 09:58 No comments: