Dates for Your Diary: Mobilize for a Greener, Fairer World.

Off the back of a fantastic conference in Birmingham, here are some dates which are essential for your diary. 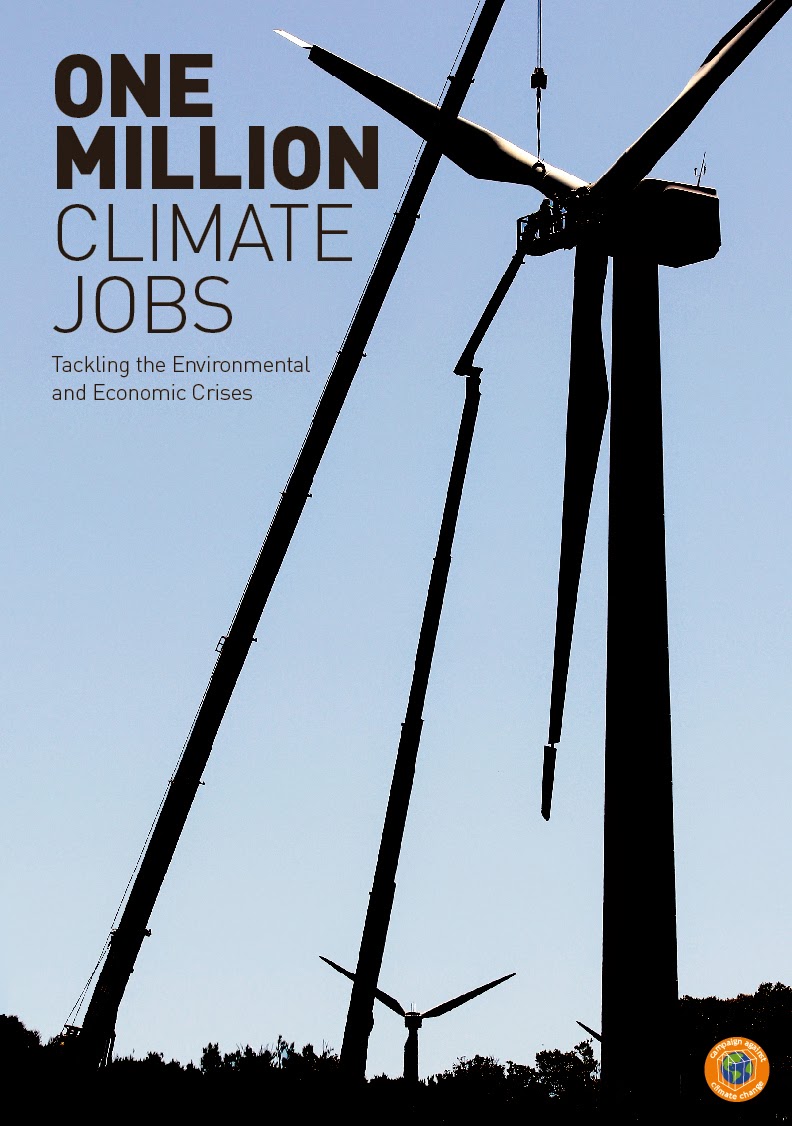 On the 23rd of September the UN will host a "Climate Summit" in New York City, USA. The stated aim is for world leaders to bring together bold initiatives to tackle climate change, and mesh these together into a legally binding agreement by 2015. Realistically, this is set to be another talking shop, which will conveniently serve to green-wash the big businesses and states involved.

However, on the eve of this summit there will be two important counter-events held in the UK. The first is the re-launching of the campaign for "One Million Climate Jobs". This campaign, organized by the Campaign Against Climate Change Trade Union Group, is primarily concerned with putting forward an alternative which serves to address the interlinked economic and ecological crises. Instead of austerity, they are calling for massive public investment in jobs that will transform our economy away from contributing to climate change, paid for by a radical redistribution of wealth.

On the 20th of September they will be hosting their conference "The International Fight for Climate Jobs" and launching an updated pamphlet. This initiative, which is linking labour and environmentalist struggles, is phenomenally important and should be supported wholeheartedly by Green Party members. 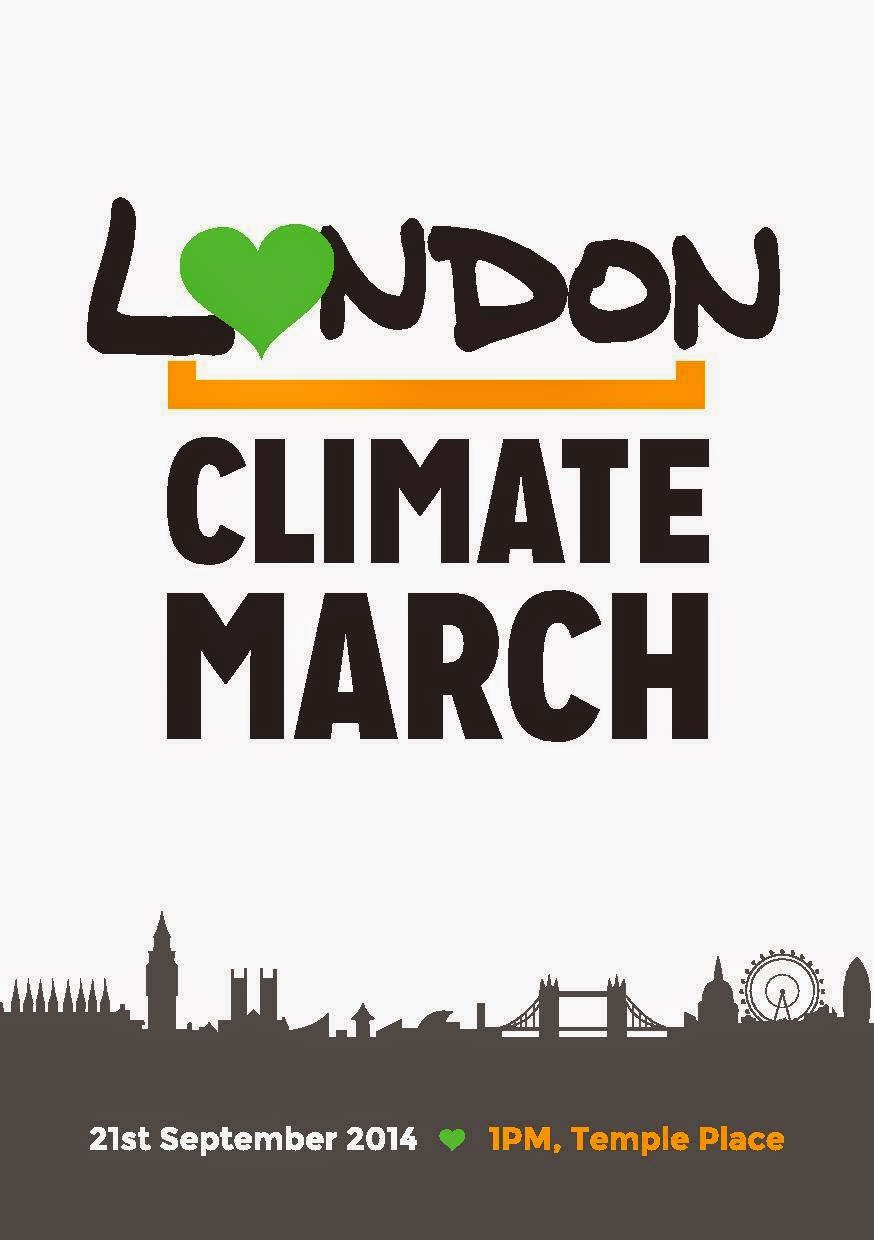 
The following day will see the People's Climate March weave through central London in order to voice its despair at the lack of action on behalf of our governments, and voice support for the ambitious and audacious transformations that will be required to stop runaway climate change.

The march will be one of many taking part across the world, from Bogota to Johannesburg, and of course including New York City where the UN summit is being hosted.

This march is supported by a broad coalition of pressure groups, charities, NGO's and trade unions, including the Campaign Against Climate Change Trade Union Group discussed above.

28th of September: March on the Tories Conference and "Hard-Up Festival"

On the 28th of September the Tories will be hosting their Autumn conference in Birmingham. At last years conference demonstrators outnumbered delegates. It is vitally important that at their final conference before the next general election we show our disgust towards the Tories austerity and continue to strengthen networks on the left. The TUC will be organizing a demonstration against the conference, which will conclude with a rally which is being dubbed the "Hard-Up Festival".

"Join us for a march and rally in London on the 18th of October 2014, to help call for an economic recovery that works for all Britons , not just those right at the top , Britain needs a payrise!" - the TUC http://britainneedsapayrise.org/

I can already hear some of you saying "another march?". I too have doubts about the efficacy of well-mannered marches from A to B as tools for initiating change. However, given the scale of the problems we face, it is important to use grasp every opportunity we have. Even if government ministers and capitalist fat cats are unlikely to be swayed at all by our presence, these marches represent an opportunity to put our vision of an alternative world forward to the population. It is also vital that Greens assert ourselves as the party of, and for the working-classes. These demonstrations can act as a brilliant forum for networking with like-minded people and strengthening ties on the left. Furthermore, groups such as UK Uncut and Disabled People Against Cuts are able to use these demos as opportunities for creative direct action.

Coaches will be converging on the capital from all over, please check for your local pick-up and book your place as early as possible.

November 19th: National Demo for Free Education - No Fees, No Cuts, No Debt. 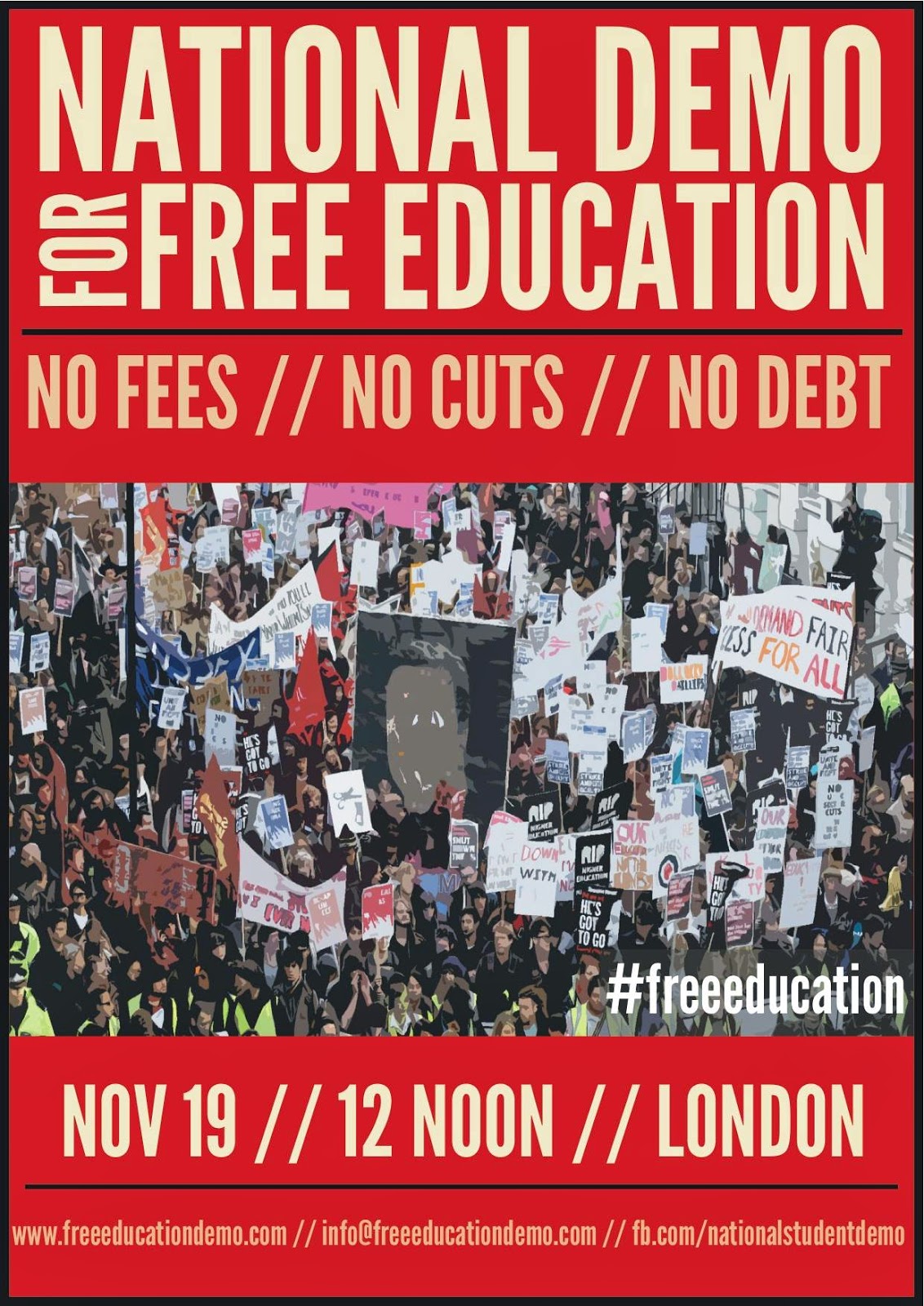 For the most part, the student movement which exploded onto the scene following the ConDem's trebling of tuition fees in 2010 appears to have faded away. For anyone involved in left-wing politics back then, it was clear that the Student's were taking the leading role in fighting the austerity agenda. University campuses and school grounds were alive with grassroots organization that quickly outstripped the cumbersome and reserved NUS. The streets of many cities thronged with students and school-children that refused to passively accept the poor deal they were dealt by the government; campuses went into lengthy occupations with draconian responses from vice-chancellors on six-figure salaries; important links between working-class and student movements were made.

However, we should not be complacent about the passiveness of today. A militant student activism that took root in 2010 continues to thrive today on many campuses. Birmingham university continues to be a battleground, Sussex students launched a vibrant occupation last year in solidarity with workers whose jobs were being outsourced, and the University of London Union became such a thorn in the side of the establishment that its democratically elected representatives have been replaced by officers appointed by management.

On November 19th the Young Greens are co-operating with numerous other organizations to arrange a national demonstration for free education. Whether you are a student or not, we would love to see you there!