Terry White will be standing for the Green Party in Rugby in the General Election.


Terry (22) lives in the town centre and works in the pharmaceutical industry and used to work in the construction industry. He is a former Liberal Democrat (working in their national office), originally from South London and studied business and economics at the University of Portsmouth.


Terry reflects the large number of especially young people who have been joining the Green Party in great numbers, angry at being the forgotten generation and their hopes of having jobs that you can build a life around by the grey parties.


The Green Party is consistently out polling the Lib Dems and gained over 1 million votes at the last European election adding an additional MEP to add the growing number of parliamentary, European and Councillors on 50 Councils in England & Wales including in neighbouring Nuneaton and Leamington.


The Green Party has also increased it membership by 80% since January now standing at over 35,000 members.

Terry White says ‘While UKIP gets the London media publicity the Greens are in reality in the fore front of the real positive people’s revolution in this country.”

”I joined the Green Party because it champions a citizens income and a living wage and our economic policy is the key to creating long term job including building on the skills that still exist in Rugby to turn us into the Green Energy capital of UK manufacturing.” 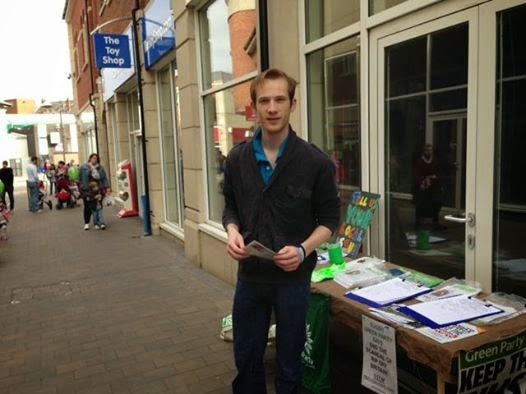 Local people have seen Terry & Rugby Green Party out in force campaigning over the threat of cuts to Rugby St Cross Hospital.

The Green Party believe that this is more likely to be as a direct result of the Transatlantic Trade and Investment Partnership (TTIP), a treaty between the European Union and the United States. The Green Party is the only political party that opposes TTIP.

Terry White says  'people have been telling us they're concerned about how much of the hospital they've lost. I haven't spoken to a single person who uses our hospital that is not concerned that we now have to travel to Coventry for services that we should be able to get from a hospital situated in a town like Rugby.'

Mr White also expressed his concern over the legal power TTIP gives to business. 'No elected government should face the threat of being able to be sued by unelected businesses.

Under TTIP, these businesses will have the freedom to buy out more and more of our NHS as well as other public services. Our campaign is all about putting public services back in public hands.


Terry and Rugby Greens are fighting for:


2.    End tax evasion that leak £120 billion of funds that should be paid by the super rich every year. If they don’t pay - they don’t trade in the UK says Terry White.


3.    Support for a Robin Hood Tax so that the ordinary people do not end up subsiding the wealthy.


5.    Take academies and free schools back into the public education service


7.     Promote Rugby as a place for the new green jobs – based on the skills that already exist in Rugby


9.    A citizen income guarantee to end poverty and the millions forced to used food bank and the situation where workers are one pay slip away from financial diasaster.


Terry White “I pledge to carry the values and beliefs of the Green Party for the common good for those who live, work and learn in Rugby.”


“I therefore pledge to only take the average skilled wage of people in Rugby and donate the rest of inflated MP’s wage back to good causes in the local community.”