Ecosocialism: Fracking, Climate and Revolution - a report from the conference 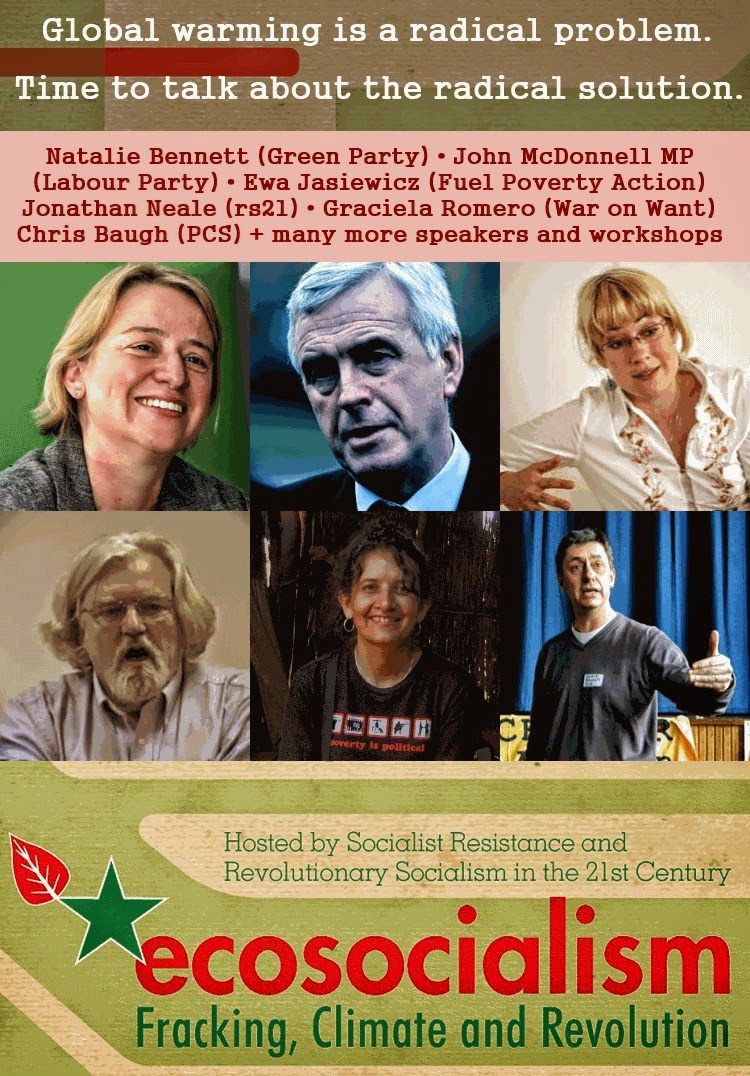 It could be argued that over recent years there has been very little to inspire optimism in socialists or environmentalists. Despite numerous elite talking shops about protecting our environment, and assurances that accumulated wealth would “trickle down”, the last 40 years have been characterized by increasing poverty, inequality and acceleration towards runaway climate change. Previous alternatives to capitalism, such as the “communist” countries of the USSR and China, have had a dire record in terms of ecological destruction and corrupted the vision of socialism as an alternative [ii]. On the other hand, some environmental movements and parties have become complicit in maintaining the status quo. Take for example the German Green Party’s support for militarization, or the involvement of environmental NGO’s in the REDD program at the expense of indigenous communities [iii]. At its heart this is a much more complex situation, but speaking in general terms I think it is correct to say that we have largely failed to prevent the socially and ecologically damaging effects of capitalism.

In this respect, the progression of the concept of “ecosocialism”, which attempts to address the fundamental deficiencies of the socialism and environmentalism highlighted above, is tremendously important [iv]. Although the British left tends to be characterised by dogmatism and division, the conference hosted on the 7th of June titled “Ecosocialism: Fracking, Climate and Revolution” exemplified its more positive values. Hosted by Socialist Resistance (SR) and Revolutionary Socialism in the 21st Century (RS21), the one-day conference featured a remarkably broad range of participants from political parties, social movements and trade unions including: the Green Party of England and Wales, Left Unity, Front de Gauche (Left Front France), War on Want, Biofuel Watch, PCS, the Labour Party, Green Left, Fuel Poverty Action, Campaign Against Climate Change, and Frack-Off Manchester.

Video footage of most of the speeches made at the conference is available here, so I will avoid giving long descriptive outlines of what every speaker said. Instead, I would like to highlight several points of agreement and common themes which arose from the day:

·         The ecological crisis is here and now, not in some far-off future. Of greatest significance is catastrophic climate change which is having a disproportionately negative impact upon those who bear least responsibility for it – the global poor.
·         It is essential to challenge the “common sense” that economic growth equals social progress. Instead of “production for production’s sake” our economy should be geared towards meeting real human and social needs, something which is compatible with a reduction of material production (and fossil fuel use), but only in we tackle social inequality. We can see roots of these ideas already well-developed in indigenous concepts of “buen vivir” (good living) [v].
·         Socialism must fundamentally change itself to take on an ecological concern or otherwise become irrelevant.
·         Although only a socialist transformation will allow us to solve the ecological rift between nature and humankind, it is still worthwhile supporting campaigns for “reforms” which will allow for a very limited and non-structural slowing of capitalist destruction.
·         Following on from this, ecosocialists must work within social movements of resistance which do not necessarily have a revolutionary outlook; through this they can try to link class and social struggles.

Many of these points of agreement played themselves out in the practice of the conference itself. For example, speakers from social movements gave passionate talks discussing their personal experiences in fighting for reforms. Michala from the Oxford University fossil fuel divestment campaign spoke about how they were lobbying their university to cut ties with Shell, and Claire from fuel poverty action expressed her disgust at cuts to free insulation schemes. Although not explicitly talking about capitalism and socialism, through their self-organization these movements help develop the people in them and represent an opportunity to link everyday needs with a bigger picture.

As a member of the Green Party and Green Left I was very pleased to see Natalie Bennett speak at this event. This wasn’t a whole-hearted endorsement of ecosocialism from the leader of the Green Party, but her acknowledgement of the need for significant social transformation and willingness to share a platform with revolutionary socialists shows that the party is a long-way off what some of its most cynical critics accuse it of being.

For now, as Jonathan Neale stated in the closing comments of the day, we must “throw ourselves into the movements of resistance”, and articulate an alternative which is desirable in the eyes of the vast majority of the population who will lose out in the unfolding ecological crisis.

[i] Quoted from Derek Wall’s “The Rise of The Green Left” p.20
[ii] Most socialists no longer view the USSR, its satellites in Eastern Europe, or China as socialist or communist at all; primarily because production was planned by bureaucratic elites rather than democratically.
[iii] For an analysis of the German Greens see Jachnow “What’s Become of the German Greens” New Left Review Vol. 81 pp. 95 – 117.
[iv] For a brief explanation of what ecosocialism is please read the international ecosocialist declaration: http://bit.ly/SFLON4. For further elaboration please search for the fantastic work of Derek Wall, John Bellamy Foster, and Daniel Tanuro.
[v] Sylvain from Front de Gauche (Left Front France) expressed his support for struggles towards “21st Century Socialism” underway in Latin America. “Buen Vivir” and “Sumak Kawsay” originate from indigenous communities in Latin America, the original sustainable development; these concepts have been taken up somewhat within this move towards socialism of the 21st century.
Posted by Rugby Green Party at 12:58